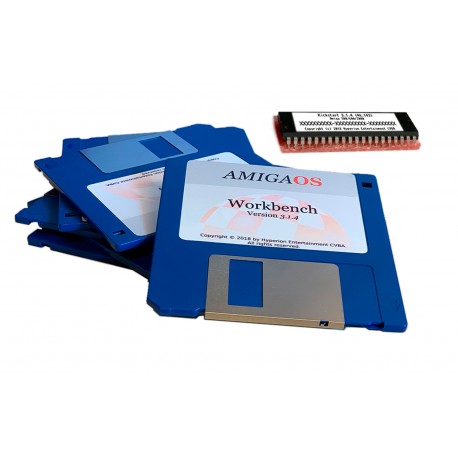 Amiga 500 revision 3 and 5 motherboards do not work directly with its Kickstarts.

Don't forget to mention your Amiga computer model when ordering !

This product is no longer in stock

AmigaOS 3.1.4: The official update you’ve been waiting for !

The new, cleaned-up, polished Amiga operating system for your 68K machine fixes all the small annoyances that have piled up over the years. Originally intended as a bug-fix release, it also modernizes many system components previously upgraded in OS 3.9.

Contrary to its modest revision number, 3.1.4 is arguably as large an upgrade as OS 3.9 was, and surpasses it in stability and robustness. Over 320K of release notes cover almost every aspect of your favourite classic AmigaOS from bootmenu to datatypes.

• Over 20 Kickstart ROM modules and many more disk-based core OS components were fixed, updated, or added,

• Native support for all Motorola 68000-68060 CPUs, and a more robust Auto-Configuration process,

• Support for large hard disks, including boot, for any OS 2.x/3.x-compliant controller driver supporting HD_SCSI_CMD, TD_64 and/or NSD. Dedicated boot partitions are a thing of the past, even on legacy devices. You can also use variably-sized "super floppies",

• A modernized Workbench as powerful as the OS 3.9 version, including new or refreshed Preference editors in the legacy OS 3.1-"GadTools" style. Its tools such as DiskCopy and Format fully support large media. Printer, hard disk and many other support tools have been fixed and upgraded,

• Remember “Diskdoctor”? It earned its PhD and is now ready to reliably rescue data from your floppies or hard disks,

• The CLI/Shell and many of its commands have been reworked and modernized, now sporting native support for pipes, softlinks, hardlinks and long filenames. New commands support running Workbench programs from the Shell or upgrading ROM modules,

• CrossDOS and the CD-ROM filesystem are now smarter, faster, and multi-threaded, adding Rockridge and Joliet extensions as well as UDF,

• Fully reworked, modernized and bug-fixed printer drivers include support for PCL and PostScript, along with legacy NEC and Epson printers,

• A colorful, professionally designed icon set is included, along with the traditional four-color icons.

No customer reviews for the moment.